I have consulted my all-powerful and genius tweens to create this list of their top 10 books for summer reading. My youngest has joined the TD Canada book club at the local library and we’re fitting in as much reading as we can during the summer school break! The TD Summer Reading Club is awesome because it’s free and they have great prizes as motivation for accomplishing your goals.

After decades of hiding, the evil Enchantress who cursed Sleeping Beauty is back with a vengeance. Alex and Conner Bailey have not been back to the magical Land of Stories since their adventures in The Wishing Spell ended. But one night, they learn the famed Enchantress has kidnapped their mother! Against the will of their grandmother, the twins must find their own way into the Land of Stories to rescue their mother and save the fairy tale world from the greatest threat it’s ever faced.

Katie-Rose, Milla, Yasaman, and Violet are happy to be a flower-friend foursome—until a new girl, Hayley, comes to school. Hayley is confident and mysterious and keeps the girls guessing. Katie-Rose worries she’s just another Evil Chick, but Violet befriends Hayley and hopes the girls can make room for her in their group. Meanwhile, love is in the air as Milla works up the courage to go on an actual date with the adorable Max, and Katie-Rose receives ten plush hedgehogs from a secret admirer. Even quiet Yasaman gets tangled in the drama when she opens a note from Ms. Perez to Mr. Emerson and realizes it’s—dun dun dun!—a love letter. Full of juicy secrets, budding romance, and—of course— flower friendship, Awesome Blossom is a fun and satisfying conclusion to the Flower Power series that once again proves Lauren Myracle “has her finger firmly on the pulse of tween girldom” (Booklist).

Deep in the ocean, in a world not so different from our own, live the merpeople. Their communities are spread throughout the oceans, seas, and freshwaters all over the globe. When Serafina, a mermaid of the Mediterranean Sea, awakens on the morning of her betrothal, her biggest worry should be winning the love of handsome Prince Mahdi. And yet Sera finds herself haunted by strange dreams that foretell the return of an ancient evil. Her dark premonitions are confirmed when an assassin’s arrow poisons Sera’s mother. Now, Serafina must embark on a quest to find the assassin’s master and prevent a war between the Mer nations. Led only by her shadowy dreams, Sera searches for five other mermaid heroines who are scattered across the six seas. Together, they will form an unbreakable bond of sisterhood and uncover a conspiracy that threatens their world’s very existence.

Eleven-year-old Raina just wants to be a normal sixth grader. But one night after a trip-and-fall mishap, she injures her two front teeth, and what follows is a long and frustrating journey with on-again, off-again braces, corrective surgery, embarrassing headgear, and even a retainer with fake teeth attached. And on top of all that, there’s still more to deal with: a major earthquake, boy confusion, and friends who turn out to be not so friendly. This coming-of-age true story is sure to resonate with anyone who has ever been in middle school, and especially those who have had a bit of their own dental drama. 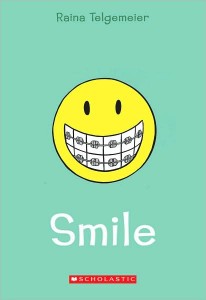 In this magical fifth installment of the hit series, siblings Abby and Jonah fall into the fairy tale of Rapunzel! Fractured fairy tales are all the rage, and this series has been a huge hit! This time, the magic mirror sucks Abby and Jonah into the story of Rapunzel. When the siblings get the famous tale all tangled up, they have to find a way to set things right . . . with hilarious results. With quick thinking and a bit of magic, can Abby and Jonah turn this bad hair day around? Find out in this whimsical adventure!

A gripping novel based on the astonishing true story of a boy who survived ten concentration camps. Based on the true story by Ruth and Jack Gruener. 10 concentration camps. 10 different places where you are starved, tortured, and worked mercilessly. It’s something no one could imagine surviving. But it is what Yanek Gruener has to face. As a Jewish boy in 1930s Poland, Yanek is at the mercy of the Nazis who have taken over. Everything he has, and everyone he loves, have been snatched brutally from him. And then Yanek himself is taken prisoner – his arm tattooed with the words PRISONER B-3087. He is forced from one nightmarish concentration camp to another, as World War II rages all around him. He encounters evil he could have never imagined, but also sees surprising glimpses of hope amid the horror. He just barely escapes death, only to confront it again seconds later. Can Yanek make it through the terror without losing his hope, his will – and, most of all, his sense of who he really is inside?

Harry Potter is a series of seven fantasy novels written by the British author J. K. Rowling. The series, named after the titular character, chronicles the adventures of a young wizard, Harry Potter, and his friends Ronald Weasley andHermione Granger, all of whom are students at Hogwarts School of Witchcraft and Wizardry. The main story arcconcerns Harry’s quest to overcome the Dark wizard Lord Voldemort, who aims to become immortal, conquer the wizarding world, subjugate non-magical people, and destroy all those who stand in his way, especially Harry Potter. 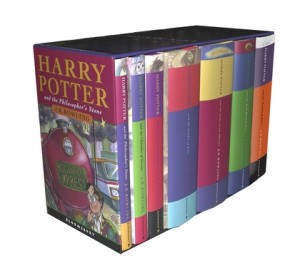 Shadowhunters and demons square off for the final showdown in the spellbinding, seductive conclusion to the #1 New York Times bestselling Mortal Instruments series. Darkness has descended on the Shadowhunter world. Chaos and destruction overwhelm the Nephilim as Clary, Jace, Simon, and their friends band together to fight the greatest evil they have ever faced: Clary’s own brother. Sebastian Morgenstern is on the move, systematically turning Shadowhunter against Shadowhunter. Bearing the Infernal Cup, he transforms Shadowhunters into creatures of nightmare, tearing apart families and lovers as the ranks of his Endarkened army swell. Nothing in this world can defeat Sebastian-but if they journey to the realm of demons, they just might have a chance. Lives will be lost, love sacrificed, and the whole world will change. Who will survive the explosive sixth and final installment of the Mortal Instruments series?

Despite the tumor-shrinking medical miracle that has bought her a few years, Hazel has never been anything but terminal, her final chapter inscribed upon diagnosis. But when a gorgeous plot twist named Augustus Waters suddenly appears at Cancer Kid Support Group, Hazel’s story is about to be completely rewritten. Insightful, bold, irreverent, and raw, The Fault in Our Stars brilliantly explores the funny, thrilling, and tragic business of being alive and in love.

Greg Heffley”s on a losing streak. His best friend, Rowley Jefferson, has ditched him, and finding new friends in middle school is proving to be a tough task. To change his fortunes, Greg decides to take a leap of faith and turn his decisions over to chance. Will a roll of the dice turn things around, or is Greg’s life destined to be just another hard-luck story?