Driving the California coastline is one of the great road trips you MUST take at least once in your life. It is incredibly unique from the mountains rising to one side of the road, to the beaches at the bottom of the cliffs to the other side, covered in seals.

After leaving San Francisco we headed south on the Pacific Coastal Highway to Los Angeles. Our first stop was the Año Nuevo State Park on the way to Santa Cruz. 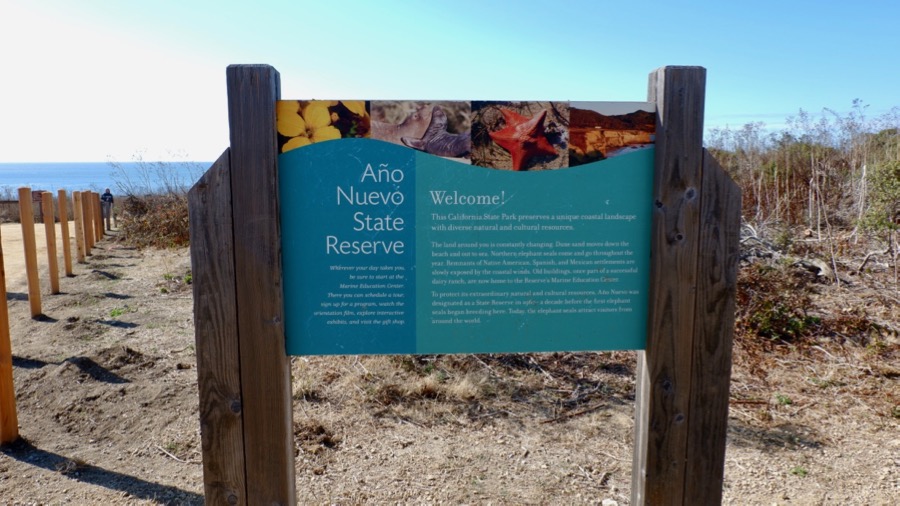 We really wanted to see the elephant seals that famously return to these beach in droves and we were blown away by the view as well! 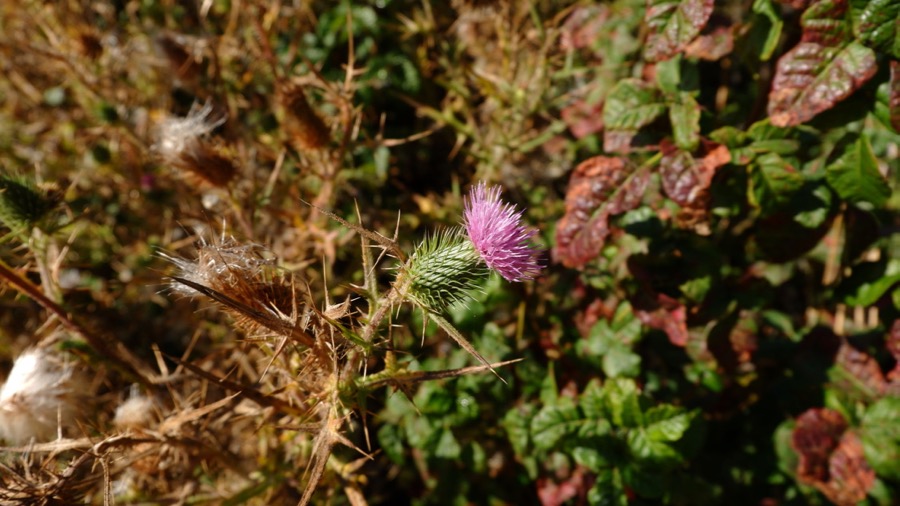 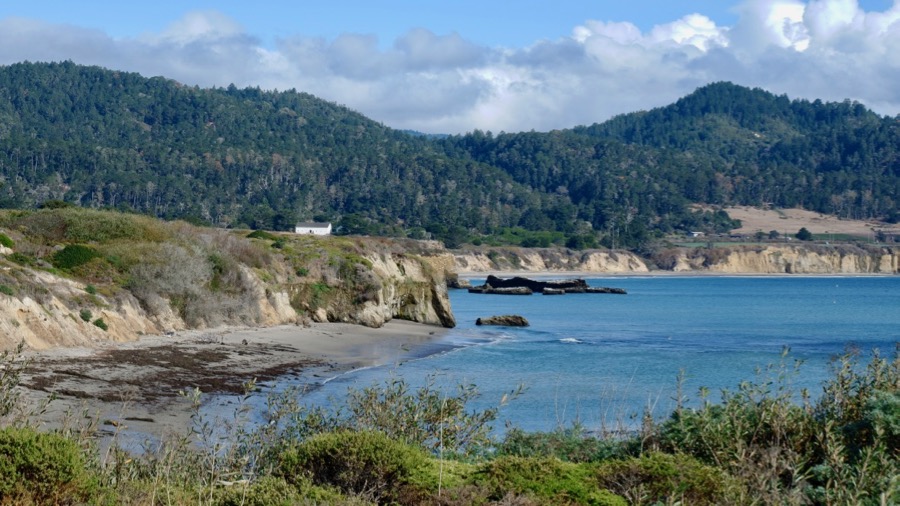 Every year 10,000 elephant seals return to the beaches at Año Nuevo State Park to most, breed and give birth. 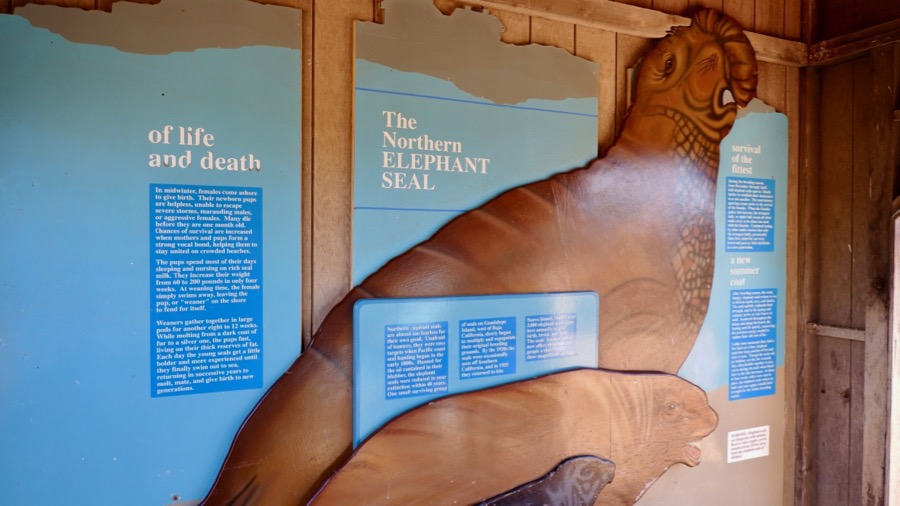 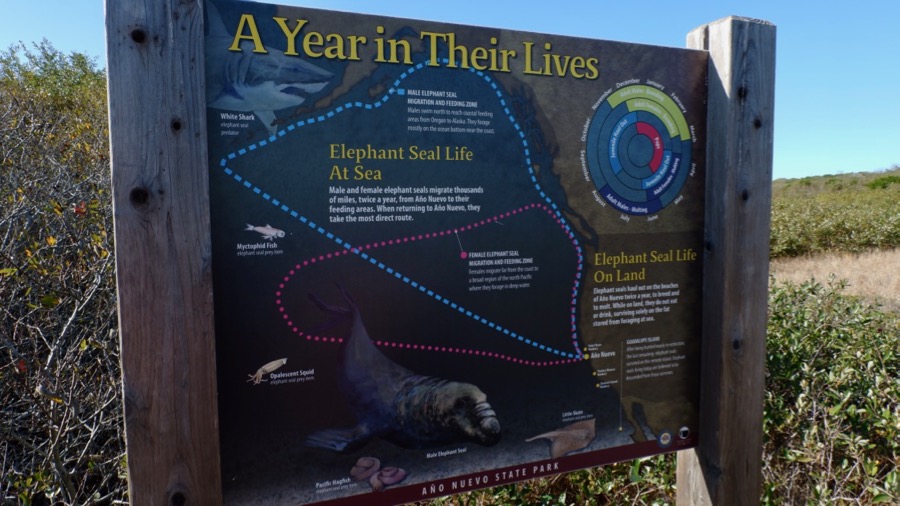 It’s an incredible sight especially when the huge males fight each other. Unfortunately, we missed any really big males because we visited at the wrong time of year but we did see some teenagers lounging around, making grunting noises and well, mostly just being lazy teenagers! 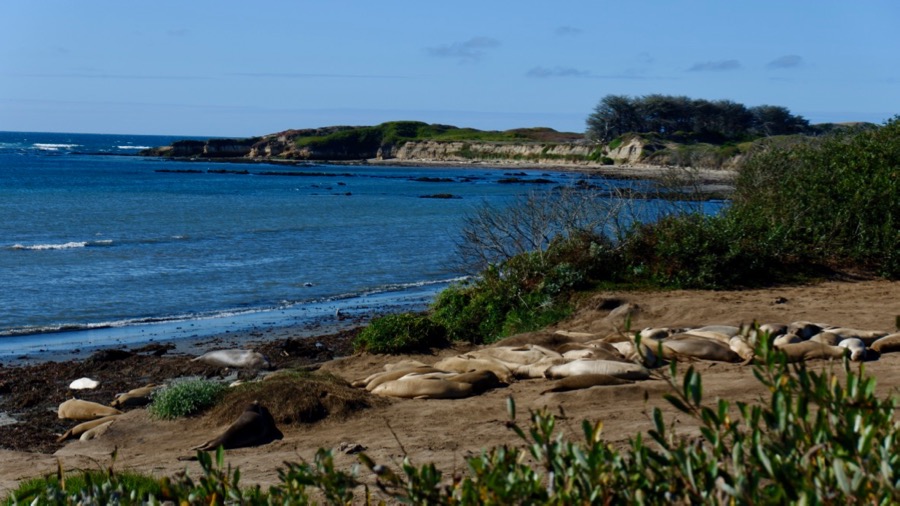 You will want to plan a good 2-3 hours to hike around the park and see the seals. It’s not a long walk but it’s over sand dunes for some of it and you have to move slowly. After our hike to see the elephant seals we were glad we didn’t have far to go to our campground in Santa Cruz.

We stayed at the KOA in Santa Cruz and loved it! The people were friendly, there were a lot of cute coffee shops and restaurants in Santa Cruz and a skatepark my husband loved! We would have loved to stay in Santa Cruz longer but this is what happens when you plan a huge cross country trip in four months!

After two nights in Santa Cruz enjoying the sights we left early in the morning and planned on stopping for lunch in Monterey for a couple of hours to get a break from driving.

Our stop in Monterey didn’t last long. This city is beautiful but was not made for trailers. Small roads, big hills and no parking whatsoever downtown. We ended up parking at the marina and trying to take a city bus downtown to the Aquarium. The sign said that the bus should come in 15 minutes but it didn’t! There was very little tourist information around in the winter and the trolley wasn’t running so we ended up walking the mile to town. 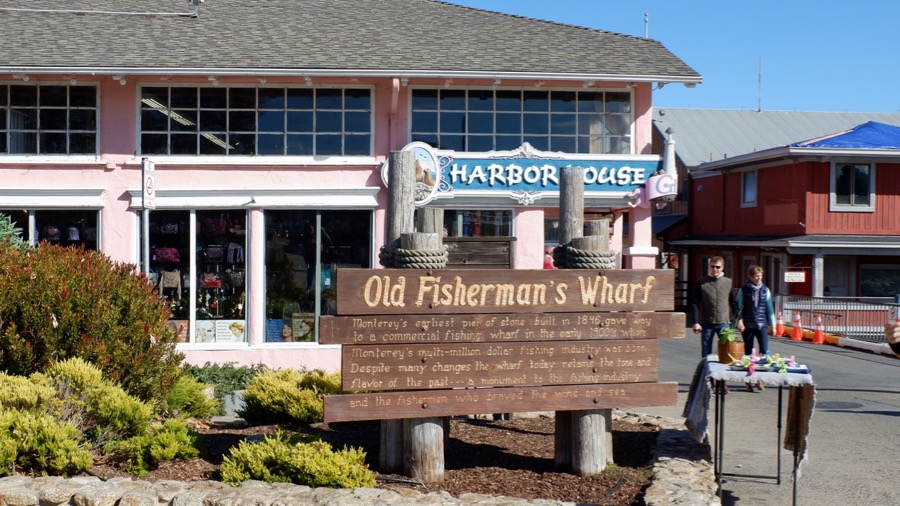 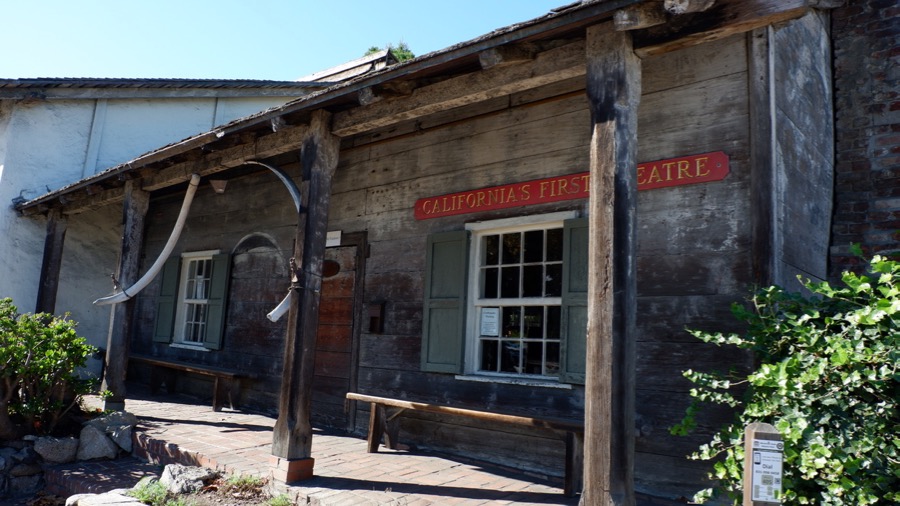 We did see this really cool small building which was California’s first theatre! 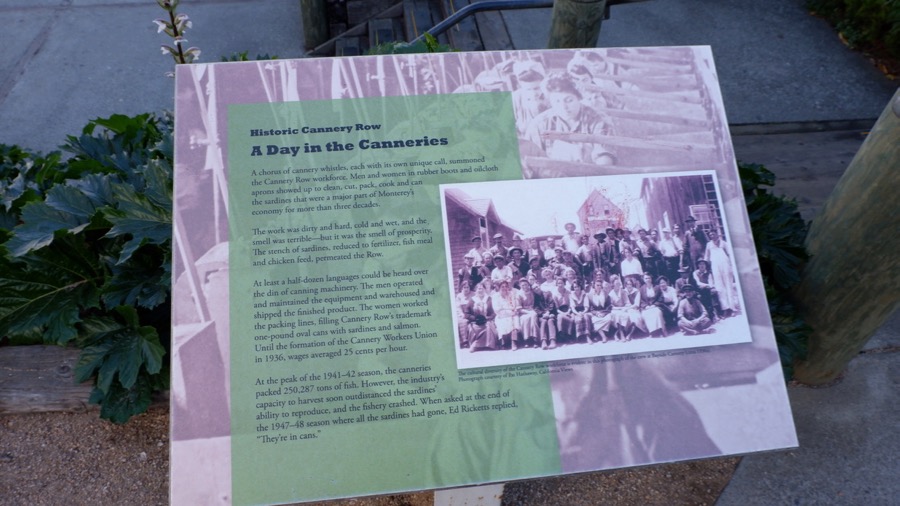 We also learned a little about the canneries in Monterey and the people who worked at them. Road schooling is constantly on the go when you’re on a road trip during the school year! 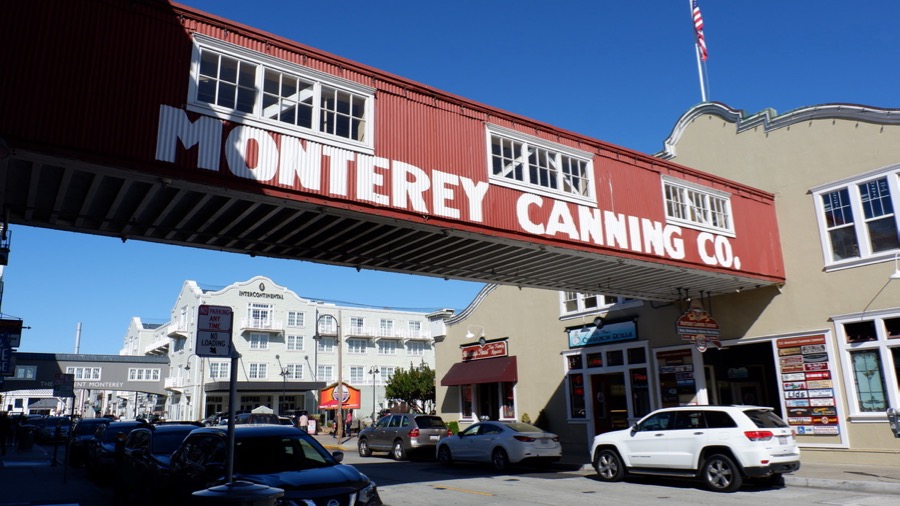 Sometime after lunch we continued our drive down the Pacific Coastal Highway through Big Sur State Park. It was really incredible and the views completely took our breath away! Sweeping, rocky coastlines with steep cliffs and beaches with surfers mingled with spots of deep forest with tall redwoods. 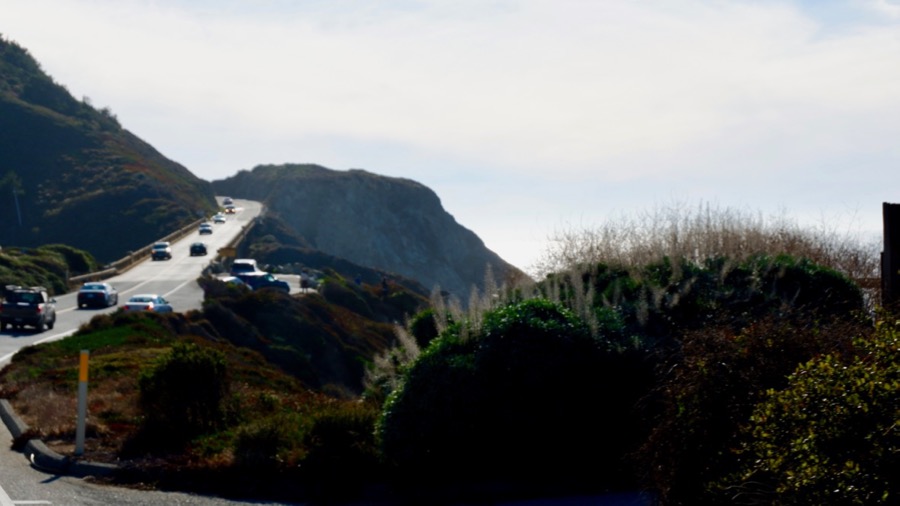 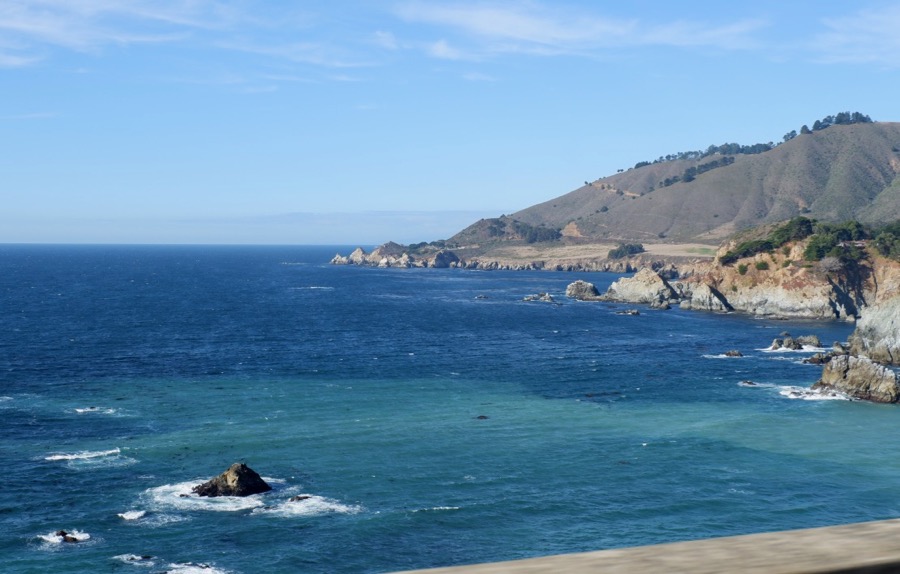 We had planned on driving all the way to Pismo Beach about halfway to Los Angeles but just past Big Sur we started noticing signs saying the highway was closed further down. Not knowing we had to check on something like this we were pretty surprised! We faced a two hour drive back to Monterey and then four hours down the highway to go around the mountains OR we could take a shortcut through the mountains. Guess what we chose?

We asked a local if there was a road we could take and whether or not we could do it with our trailer. He said we would have no problem but we were a little nervous when we saw the entrance to the road had a sign that said no trailers over 30′ long. Our trailer is 31′! It’s too bad we didn’t see this sign until we were actually ON the road! After that there was no place to turn around.

The entire road was switchbacks around the mountain with tall cliffs dropping off to one side and straight up on the other side of our small roadway. The worst parts were almost one lane in both direction and we had to go very slowly so we wouldn’t block anyone coming in the other direction. A few locals weren’t happy to see us on the road and let us know with colourful sign language from their cars.

But we made it through and after the scary parts were over it was a beautiful drive through the woods that led us back to the main highway and to about a half hour north of Pismo Beach. We were back on track!

On to the next adventure! 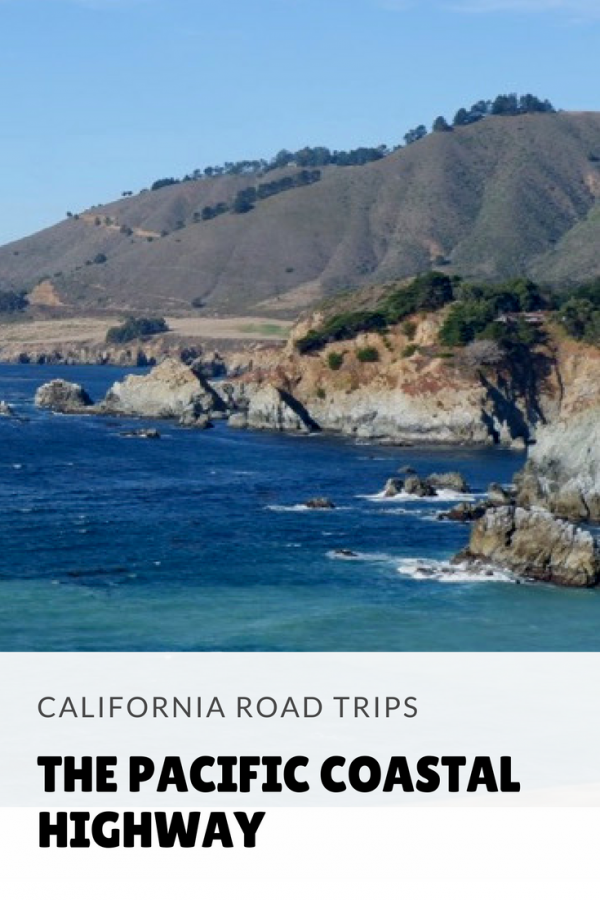 « Visiting the Winchester Mystery House
Living Your Life With Intention »