The Light Between Oceans
by M. L. Stedman
Book Review by Laura Snow 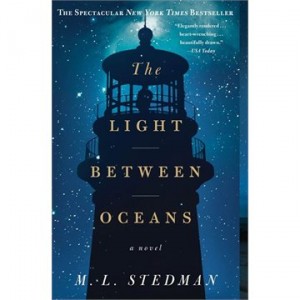 I chose The Light Between Oceans for my book club to review because it was a “Heather’s Pick” by Indigo (Chapters) Canada. I haven’t read a Heather’s Pick I didn’t like, and this was no exception. A fiction novel, set in 1920’s Australia to begin, it surrounds a Lighthouse keeper, Tom, and his wife Isabel, who live a solitary life on Janis Rock, a remote island off Western Australia. Isabel, devastated after losing three babies to miscarriage and stillbirth, convinces Tom to let her keep a baby who washes up on the island in a boat with her father dead alongside her. Their choice to keep the baby causes much heartbreak, regret and guilt and leaves the reader desperate to hear how it all ends.

There are many excellent characters in the novel including two very interesting seamen, Ralph and Bluey, who transport supplies to the island every three months. They are in a way Tom and Isabel’s only friends and bear witness to their joy and pain.

The novel is beautifully written and the descriptions of rural Australia, the island and the lighthouse so detailed and mesmerizing I could sense myself walking along behind Tom and Isabel, feeling the sand under my feet and the wind in my hair, as they weathered their life on and off Janus Rock.

“Very slowly, he turned a full circle, taking in the nothingness of it all. It seemed his lungs could never be large enough to breathe in this much air, his eyes could never see this much space, nor could he near the full extent of the rolling, roaring ocean. For the briefest moment, he had no edges.”

M. L. Stedman writes about life in the 1920’s as if she had experienced it herself, describing the trauma Tom suffered in the war before coming to the island to be a Lighthouse keeper. You experience the affect the war had on German people living in Australia, a place so far away from the action of war and yet still intimately affected by it. You begin to understand why Tom needed the solitude of the island and why he and Isabel were able to see their choices as right or wrong at different times in their life.

“When he wakes sometimes from dark dreams of broken cradles, and compasses without bearings, he pushes the unease down, lets the daylight contradict it. And isolation lulls him with the music of the lie.”

I could hardly put this novel down for a minute as I was so involved in the character’s lives I was determined to see them through to its conclusion. I found myself wanting to travel to Australia to experience the landscape and the people first hand. I highly recommend this novel to anyone although I think it would be enjoyed most by a female audience.

If you have read the novel please comment and let me know what you thought. What were your favourite parts? Would you have made the same decisions Tom and Isabel did? I feel I would not make the same choices Isabel did, however, I could never be sure unless I was in the exact same circumstances.