I had the opportunity to review an advance reader copy of the first novel written by Justin Go. I should admit that I’ve never read an advance reader’s copy of a book before, so I have nothing to compare this book to, in that sense. I thought perhaps an advance reader’s edition would still have some changes needed or spelling errors, but this novel was, unbelievably, perfect. “The Steady Running of the Hour” is Justin’s debut novel and is very well written. 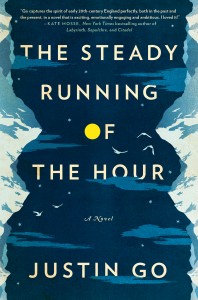 Let me begin by introducing the story to you.

A QUEST NOVEL and a historical tour de force, The Steady Running of the Hour unravels a tale of passion, legacy, and courage reaching across the twentieth century.

In 1924, the English mountaineer Ashley Walsingham dies attempting to summit Mount Everest, leaving his fortune to his former lover, Imogen Soames-Andersson—whom he has not seen in seven years. Ashley’s solicitors search in vain for Imogen, but the estate remains unclaimed.

Nearly eighty years later, new information leads the same law firm to Tristan Campbell, a young American who could be the estate’s rightful heir. If Tristan can prove he is Imogen’s descendant, the inheritance will be his. But with only weeks before Ashley’s trust expires, Tristan must hurry to find the evidence he needs.

From London archives to Somme battlefields to the Eastfjords of Iceland, Tristan races to piece together the story behind the unclaimed riches: a reckless love affair pursued only days before Ashley’s deployment to the Western Front; a desperate trench battle fought by soldiers whose hope is survival rather than victory; an expedition to the uncharted heights of the world’s tallest mountain. Following a trail of evidence that stretches to the far edge of Europe, Tristan becomes consumed by Ashley and Imogen’s story. But as he draws close to the truth, Tristan realizes he may be seeking something more than an unclaimed fortune.

The novel starts in the present day, with Tristan starting his search in England, trying to trace Ashley and Imogen’s lives. Then the story turns back to the year 1914, and the actual love story of Ashley and Imogen plays out on the pages, happening concurrently with Tristan learning about the same events, years later.

Some stories that flip through time periods leave you lost and confused with too many characters to follow. This novel is different. The pieces of the story and the puzzle are revealed masterfully in a rhythm, through both time periods, so you feel completely at ease with the flow of the story. The novel is always centred around the same four basic characters. I became entranced by Ashley and Imogen’s lives, wondering what would be revealed next, in both time periods. I also loved reading about Tristan’s race across Europe. This is an adventure I would love to have someday!

There is a massive amount of detail and dialogue in the scenes. The details are so well described, you are completely immersed in the storyline. I was easily able to imagine myself walking along with Ashley in the trenches of war, on Mount Everest, or along with Tristan through the fjords of Iceland and the streets of Paris.

I really enjoyed this novel.  The story is creative and unique. It’s rather sad at times when he talks about the war in detail but it makes the story more believable. If you like a good adventure novel, you will love the “Steady Running of the Hour”.

The novel is now for sale in stores and online!

Disclaimer: I was given a copy of the book to review. The opinions in this article are my own.