Everyone should take some time to play tourist in their own town. Not only is it cheaper than travelling far away but you always end up learning something new about your own town or country that you share with others. It’s a good thing to learn to love where you’re from and celebrate it!

Today we decided to head to Peggy’s Cove, NS for the day. Peggy’s Cove is a very busy tourist site and today was no exception. Luckily, there is plenty of parking and space for people to spread out and walk around, so at this location crowds aren’t a bad thing. 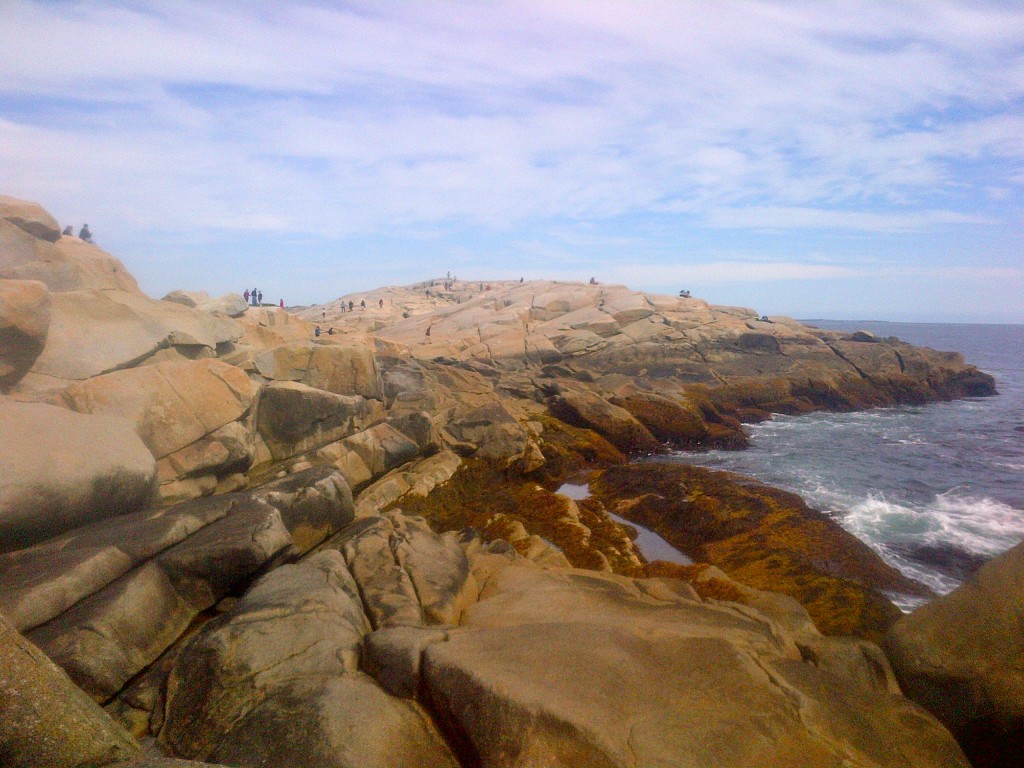 Peggy’s Cove is a small rural fishing community, to the southwest of Halifax, NS, on Canada’s East Coast. The main attraction, the lighthouse, built in 1914, is still operated by the Canadian Coast Guard and is one of the most photographed lighthouses in the world. The lighthouse is situated on a large bedrock point carved by glaciers and ocean tides.

About 20,000 years ago, an ice ridge moved south from Canada’s Arctic region covering much of North America. The ice ridge eventually melted and shifted and in the process scooped away and scoured large sections of rock, vegetation, and topsoil. As melted land glaciers flowed back to the oceans, the changing tidal flows and rising sea levels filled the scarred areas with water, forming coves and inlets.

Large boulders composed of 415-million-year-old Devonian granite, called glacial erratics, were lifted by the ice and carried for long distances before being deposited upon the landscape as the ice receded, leaving rugged barrens. There are rocks large and small deposited all over the landscape. People have created rock Inukshuk‘s all along the landscape around Peggy’s Cove with the smaller deposited rocks.

Peggy’s Cove has a few man made walkways out on the rocks, but most of the area is explored by walking on the rocks themselves, and there are no barriers to stop people from going to close to the water. You have to keep a close eye on children and keep in mind that large waves can splash up and wash over the rocks in certain areas, especially during storms and at high tide. There are warning signs everywhere and it is perfectly safe to explore if you are careful. There are lots of fun caverns and holes in the rocks for children to look at.

There is a nice restaurant and gift shop, The Sou’Wester, right on the point by the lighthouse, and several other food and gift shops down the road . In the Sou’Wester you can press a penny into a souvenir to take home with you for $0.50. We started collecting pressed pennies at Walt Disney World in Florida, and now try to find these machines everywhere we go.

When we got home, my youngest daughter told me that she had “so much fun today”. And she doesn’t even realize that she exercised and learned about rock formations and lighthouses. I think we’ll have to repeat this adventure!